BBQ and Bluegrass PRIDE with the Empty Bottle String Band 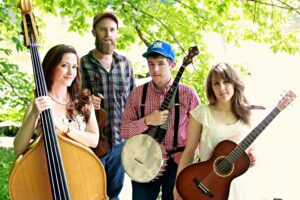 The Empty Bottle String Band originally formed to play a one-time stint at a farmers market, but have already reached new heights in popularity all over the Southeast US, appearing regionally at the Bristol TN/VA Rhythm & Roots Reunion, the nationally broadcast tv show Song of the Mountains on PBS, the WDVX Blue Plate Special, the Dock Boggs Festival, and many other festivals and venues in the Southeast. This old-time string band is composed of energetic and artistic multi-instrumentalists and singers who met in the East Tennessee State University Bluegrass, Old-Time, and Country Music Studies program. They specialize in playing toe-tapping old-time string band music and are known for their upbeat fiddle tunes and feel-good music that makes people want to get up and dance.