An evening with Justin Hiltner 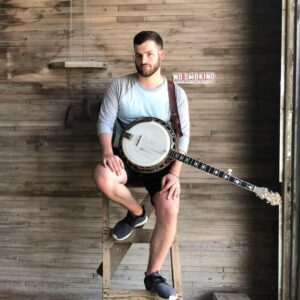 IBMA Award nominee Justin Hiltner is a banjo player and songwriter based in Nashville, TN. His high-energy, Scruggs-style picking is unique in its combination of traditional aesthetic and progressive, outside-the-box thinking. Having a dynamic, variable voice on the banjo has given him opportunities across genres, not simply in straight-ahead bluegrass or “newgrass” alone, but also in folk, country, singer/songwriter, and Celtic. His original songs don’t fall neatly into any of these genre labels, but are instead focused on their stories - which are intensely personal, while maintaining relatability and accessibility.

Over the course of his eight years in Music City he’s toured, performed, and collaborated with bluegrass greats such as Bluegrass Hall of Famer Roland White, Laurie Lewis, Jim Lauderdale, Ronnie McCoury, Molly Tuttle, and Missy Raines. In 2016 he was nominated for the International Bluegrass Music Association’s Instrumentalist Momentum Award. As a songwriter he has been featured in the IBMA Official Songwriter Showcase and he received an Honorable Mention in American Songwriter magazine’s Lyric Contest. In 2019 he was nominated for IBMA’s Collaborative Recording of the Year Award for his performance on Roland White’s “Soldier’s Joy/Ragtime Annie” from White’s album, Tribute to the Kentucky Colonels.

An activist and proponent of inclusion and visibility in roots music, he produced the first ever showcase of diversity in bluegrass, now an annual event at IBMA’s business conference, and he authors the eponymous “Shout & Shine” interview series, which focuses on underrepresented and marginalized identities in roots music, for The Bluegrass Situation.