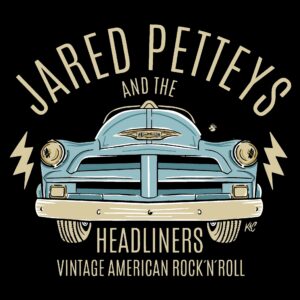 Jared Petteys grew up in Corinth, NY. He is a self-taught guitarist and vocalist who picked up guitar by ear at age 8 and submerged himself in vintage American music after spending much of his childhood going to car shows with his father. He began his music career while serving in the Army as a Cavalry Scout in Savannah, GA and Iraq.

He graduated from Dark Horse Institute in Franklin, TN after studying audio engineering and music business to help propel his self-managed career. He co-wrote and composed his first original song “When She Walked Away” with Nashville songwriter Daniel Johnson. His debut single took elements of the blues and surf style and meshed them with his lifetime love of rockabilly.

Jared moved to Charleston, SC upon seeing a wide open opportunity to spread his original music and open his business, Retro-Sonic Records & Productions, to support his band and dream. With his high energy, raw vocals, and jumpin’ rhythm section, he quickly got the attention of the city and Rockabillaque producer Simon Canton. Since then he has played with acts such as Lee Rocker, Reverend Horton Heat, Big Bad Voodoo Daddy, Wayne “The Train” Hancock, and Third Man Records artist Olivia Jean.