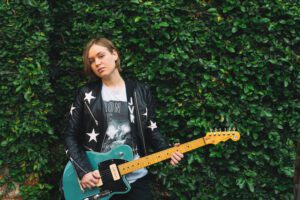 Jay Van Raalte is a guitarist, songwriter and singer from Charleston, South Carolina. Jay works fast. Within six months of picking up guitar, she found herself on stage alongside Grammy winner Buddy Guy at age 14. She didn’t slow down. In 2015 she co-founded Jump Castle Riot while in high school and grew it to the point of producing two CD’s (Glitter and Gold, Never Going Back), playing up and down the East Coast, and being named Charleston’s Up and Coming Band of the Year (2016), Blues Band of the Year (2016, 2017, 2018), Rock Band of the Year (2019) and Guitarist of the Year (2018). Jay will soon release a solo debut, Linearity, and plays behind other artists as a guitar for hire.